All week we have seen Arsenal fans come together to demonstrate their dissatisfaction at how Arsenal is currently owned and run.

This culminated in the disgraceful decision to join the so-called Super League.

Any organisation that advocates Arsenal undermining our domestic football structure and joining a closed, franchise model does not understand the values of our club, our fanbase or football in this country.

This is what happens when Investors replace Custodians.

We understand the calls of ‘Kroenke Out’, but we also believe we have to plan for what comes next. Who replaces Stan Kroenke? There is no benefit in swapping one bad investor for another. We believe new models are needed where fans have more say

Our view is that given the billion-pound valuations of the big clubs the most realistic opportunity for change comes from Government action.

That’s why along with other fan groups we met the Prime Minister this week and told him about Stan Kroenke’s actions, including how he had compulsorily forced supporter shareholders out of Arsenal. We asked for his support and commitment to a restructure of football ownership in England.

The Prime Minister promised that he will set up a review and that the options include ownership models such as the German 50+1 model, the right for fans to buy shares, a golden share (veto) over key decisions, supporters on club boards and stronger independent regulation of football including strict sanctions for owners and clubs failing to comply.

The AST will work with other fan groups and Arsenal supporters to submit evidence to this review, making the case for supporters to be put back at the heart of ownership structures.

We are supported in this endeavour by Sir Keir Starmer, leader of the opposition and an Arsenal season ticket holder.

We also know that fans want to express themselves ahead of the Everton game this Friday. We support visible and public protest as long as it is peaceful and complies with Covid guidelines and all other laws.

We also encourage Arsenal’s army of loyal fans across the world to join in. We have created a number of social media assets that can be shared, and we also encourage others to create their own messages and protest in ways they think are best. We know there will be many creative and powerful messages.

So let’s make Friday a call for change. In the hours before the game against Everton let’s make our voices heard, unite as a Fanbase and say #KroenkeOut #FansIn

Remember WE are The Arsenal. Victory through Harmony. 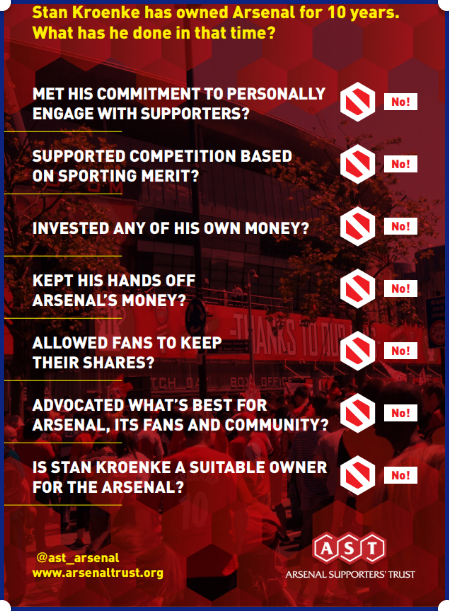